To access the existing jdownloads_custom.css file please see the Appendix.

In this example the background colour of the subheader is changed by just including the css opposite in jdownloads_custom.css

The change maybe not desirable but it illustrates the point!

Another simple example is making the download button have a 3-D look.  The effect makes the button standout better.

The additional css added to jdownloads_custom.css is shown opposite.

The CSS added into jdownloads_custom.css is just the additional or modified css, there is no need to replicate the original from jdownloads_fe.css.

The statements added into jdownloads_custom.css will remain across updates.

If you were to change jdownloads_fe.css then it may well be overwritten on each update.  Hence in this way you can maintain your customising without it being changed by jDownloads updates.

Sometimes however the template may load in some of its css last.  In general the last ccs statement loaded replaces or adds to any existing css.  The exception to this is if an earlier css statement had the !important  text added to the css statement.

The priciples of which css applies is quite complex.  It is called CSS specificity and is calcuated as a numeric value with the highest value taking precedence. There are numerous references on the web and a few useful ones are listed below for a better explanation

However as a simple approximate working guide in the present context, the CSS rules are essentially that preference is given, in order, as noted below.
To illustrate consider the following.  Suppose the generated code contained an html statement such as
<div style="padding-bottom: 3px; text-align: left;">.
Because the CSS is inline then there is nothing we can do to either the padding-bottom or text-align by changing anything in any of the css files.
From the examples above it is clear one can both change existing attributes and add new ones.

There are several ways in which you can access jdownloads_custom.css.  We will note three of them here.
Note After editing jdownloads_custom.css using any of the methods you will almost certainly need to clear both your browsers cache and if you use it the Joomla! cache. This is because there is a high probability that the pre-edited version is cached.  So if you do not clear your caches then you will not see the effect.

From the jDownloads Control Panel  select

. This brings up the layouts panel as shown opposite. 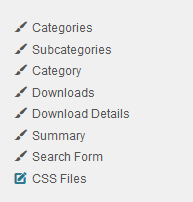 The three css files used  in the frontend are listed with tabs to show each one.

You can edit this directly but note it is a very simple text editor.  After editing then click on the

button, this is on the Tool bar at the top of the page.

Using the regular cPanel File Manager navigate to <site-root>/components/com_jdownloads/assets/css where you will find the three css files.
Select jdownloads_custom.css, apply any edits then Save.

In this case the scheme is to use ftp to download the jdownloads_custom.css file from <site-root>/components/com_jdownloads/assets/css to your local device.

Actually it is probably wise to keep a copy of the original version you have downloaded!
It is also useful to download jdownloads_fe.css so you can use it as a reference.

Then edit jdownloads_custom.css using a text editor such as Notepad++.
NB.  Notepad++ may be found here.

Upload to overwrite the existing jdownloads_custom.css file. And remember to clear the cache or otherwise reload the page.

Personally I prefer this way as I can then use the Notepad++ editor which will highlight the code and make finding "mistakes" easier.
ColinM January 2020.