Limits are applicable over daily, weekly and monthly periods.  They may be set on  either or both the number of downloads or the combined megabyte size in each time period.
For example we could set a limits of say 8 downloads/day, 20 downloads per week and 50 downloads/month or just 5 downloads/day and 48 downloads/month with no weekly limit.  In addition we could set a daily limit of 120Mbyte/day,  500Mbyte/week and 1750Mbyte/month or perhaps just 2000Mbytes/month.

There is also a seventh limit which controls the number of Downloads/day that a user may create from the front end if they have the relevant permissions.   This is only shown on the front end if the user has permission to create a new Download.  These seven 'principle limits' may be set in any combination.

There are a further two 'special limits' that relate to the way downloading happens, these are described separately below.

It is important to note that whilst the Limit values are set on a User Group basis,  the limits are applied on an individual user basis.  One User Group may have completely different limits to those set in a different User Group.  Where a user belongs to multiple User Groups then the limits in the user group that has the highest jDownloads ranking will be used.  For more details on ranking please see the article Which User Group is used.(opens in a new window/tab)

When using limits there are four aspects to take into account as listed below.

The field 'Activate log function for Downloads?' in tab 'Global Settings' in jDownloads Options must be set to Yes.

It can be very frustrating for a user to suddenly discover they can no longer download items because one, or more, limits have triggered.  There are two ways that this may be resolved.

One method is to activate the View Limits option in User Groups Settings - Group Settings tab (not the Limits tab!!) as shown opposite.

The Limits Message section describes the message that will be shown to the user on the Summary View.  jDownloads detects that there is information to be shown and will then automatically show the Summary View irrespective of other settings.  An example of the Summary page with the limits message is shown later. 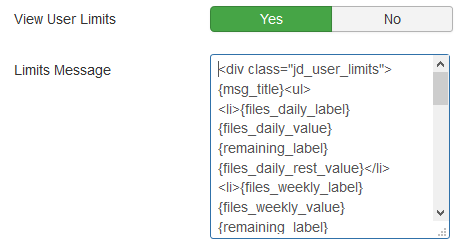 The alternate method is to use the 'jDownloads View Limits' module.
For more details of this see the article 'View Limits Module' (opens in a new window/tab)

Reminder:  The principle limit values are set on a user group basis but applied on an individual user basis.

When showing the main User Groups Settings click on the name of the particular User Group for which you wish to set or modify the limits.

There is a specific tab in the User Groups Settings to set the limits for the current User Group.

Two of the daily limits are ilustrated opposite.  There are similar Limits for Week and Month.

Each principle limit has its own a language sensitive message field using the language selectors like {en-GB}English message text{/en-GB}{de-DE}Deutscher Nachrichtentext{/de-DE} and of course its own value field.
As noted earlier there are seven principle limits.If the value field is left as 0 then the limit does not apply.  If one or more limits occur the the user is shown them when they attempt to download.

Example of the Limits

In the following example the daily limit was set at 3, the weekly at 5 and the monthly at 7.   There were no size limits set.  jDownloads automatically uses the active Summary layout to show the limits.

So the daily and weekly number of remaining downloads were the same as the limt values.  But the number remaining for the monthly amount shows that there has been a previous download in the month.

Note that as yet the downloading had not occured!

The limit on Number of Uploads is only present if the user has Create permission. 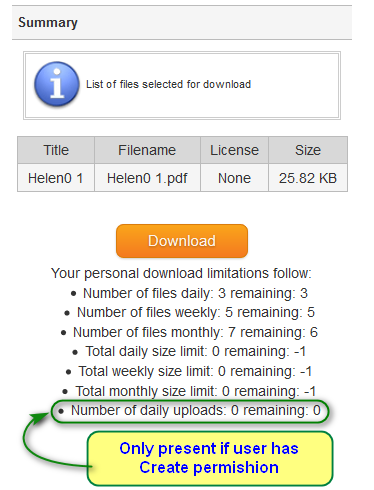 Also recall that the limits are applied on a personal basis, that is the downloads made by one user do not impinge on another user even if they are in the same user group.

After downloading various files there came a time when a limit was reached.

This caused the message in the Summary view as shown opposite, and there is now no Download button.

The actual message reads as follows:
"You have reached your daily limit for the allowed number of Downloads.
You can resume downloading tomorrow. A new day starts when the Server time has passed the time 00:00:01."

By looking at the log file as shown below it is quite easy to correlate with the user reports. User uploader-beta has four downloads, three today and one about 3 weeks ago

There are two special limits: "Download Duration Restriction" and "Transfer Speed Restriction".  These are available in all user groups and apply to all users in that group.  That is they are not personal limits.

Download Duration Restriction.
The limit was introduced in earlier versions of jDownloads when Internet speeds and reliability were much lower than normal today.  It is particularly relevant if Downloads are 'priced' so that the same Download does not cause multiple charges within a given time period.

This limit sets the duration (in minutes) in which a new download of the same file and from the same user is not counted as a 'new' Download. This value is important when Download manager software is being used, and also for resuming interrupted Downloads.
Note: If the user changes to a different web page in their browser, either by a new Tab or a new Window, then that terminates the period prematurely!
It is suggested that if you anticipate internet 'challenges' then you should include a note on the Download page advising users not to change to a new page.

Change the value of 60 minutes only if you are sure of the consequences!

Transfer Speed Restriction
Basically this limit artificially slows down the transfer rate.  It is again intended for situations where poor interrnet performance may be an issue.
With this limit users in the user group have a download speed limit in kbits/second. For example if you set the value to 1024, then the downloading transfer speed is limited to a maximum of 1MB/sec. If you set it to 0 no limit is applied.
Note: This limit does not apply if the user is downloading files from an external site.
Back to Top

The jDownloads System Plugin allows an upper limit that is specified in days for the number of download logging records.  The value you set will depend on the the highest limit duration.  For instance if you have only set say daily and weekly limits then a maximum of 7 days will be sufficient.  But if in one or more User Groups you have set a monthly limit then you will need to set at least 31 days.

Note that when checking for monthly limits, jDownloads uses the current date and then checks back for the same day upto one month earlier.
It is essential to set a limit for the period that log records are kept in the database as otherwise the database will grow indefinitely, which will eventually lead to problems.  Older data is deleted automatically once a day.
However if you use the log file to gather your own statistics then you may wish to set it to a longer value.  The available durations are 1, 7, 31, 93, 366 and 500 days.  The default is 93 days.

To find the jDownloads System Plugin go to Extensions - Plugins.

This brings up the entire list of all plugins, which might be quite long and spread over several pages.

So enter jDownloads in the search bar and click on the Search button.

You can then click on the name System - Plugin to open it up as illustrated above.