this will bring up the specific Layouts type selection panel as shown on the far right.

It will also show  will show the

buttons near the top of the view.

button will give access to CSS Edit.
Control Panel

After clicking on the

a page which describes each of the five CSS files used by jDownloads is presented.

At the foot of the page there is a pull down allowing selection of the relevant css file.

Next to it is an 'Export CSS File' button. Clicking on this button initiates a download sequence

shows a page which describes each of the five CSS files used by jDownloads is presented.

At the foot of the page there is a brouse button,

, allowing selection of the relevant css file on your device.

After selecting the appropriate CSS file The button will look like

Next to it is an 'Import CSS File' button. Clicking on this button initiates the uploading sequence.  jDownloads checks that the file name is one of the five possible names and a few simple CSS checks.  If it is not a correct name or othwise fails the upload is aborted with a message:

It is recommended that before you upload a modified CSS file you check it is valed by using a CSS checker such as WW3 CCS Validation (opens in new window/tab).

Note at the time of writing this checks to level 'CSS Level 3 + SVG'.   In at least one place jD uses some 'CSS4' items.  There are also warnings about unknown vendor extensions such as -webkit-box-sizing and the like. These are retained for older browsers but will gradually be purged.

button will give access to the online CSS Edit abilities.

As with the other sections the view gives a description of each frontend CSS file.  After the descriptions you will find a set of tabs as illustrated below.

If, for example, you select the tab jdownloads_fe.css you would see a listing such as shown opposite.

This screen is 'live' in that you can make changes directly!! It has a scroll bar on the righthand side.

At the top of the view there are

The cancel button exits without any changes being saved but the Save & Closse button saves all the changes.  The resultant CSS becomes the active CSS next time you load a page. 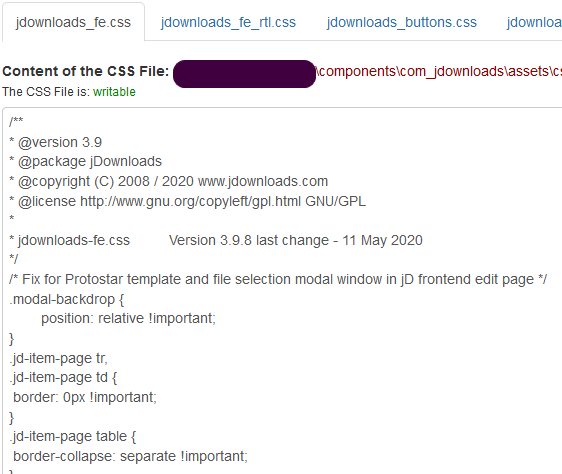 We strongly recommend that you do not use this method unless you are well versed in CSS.

Use the Export and Import as you can then get any changes checked before you commit - and you can also make a copy as a backup.

Usually the best place for any site specific changes would be to edit the jdownloads_custom.css file.
ColinM November 2021