symbol.  There are eleven 'star' images to choose from.  Each has the same shape but has a different colour.  Also you may upload your own 'feature' image.

The picture opposite illustrates the simplest level of styling with just a star to indicate 'featured'.

As noted later there are additional styling possibilities to make a featured Download more evident.

The settings for featured are found in Options - 'Pictures and Buttons' tab.

The first settings allow you to select the symbol itself.  The available selection are different coloured stars.

The next two settings select the width and height of the symbol respectively.


The fourth setting allows different views by use or not of background colours.

As illustrated opposite, selecting 'No' will then just show the featured symbol in the title bar.


Assuming that the relevant CSS classes have been setup then selecting 'Yes' could add a coloured background to the featured Downloads to really make them really stand out. 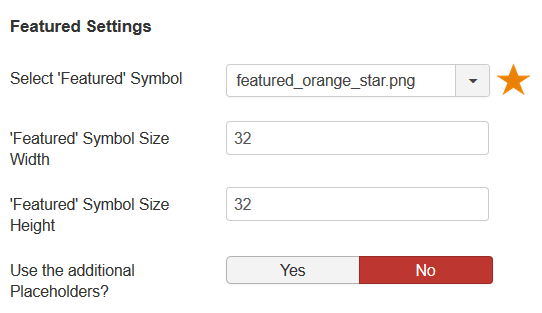 As noted later the colour scheme is changeable using CSS.

The next question to answer is how to do you make a Download featured? This is straight forward in either the Frontend or the Backend.

In the frontend either whilst editing an existing Download or creating a new one go to the Publishing tab and, using the pulldown, change the Featured option to Yes for 'featured'.

1. If editing or creating a Download then, in the General tab, change the setting of the Featured option from No to Yes by clicking on the Yes.

Obviously this is very tedious if you have several Downloads to set to featured.

2. So in the backend on a listing of the Downloads you can select the relevant Downloads by ticking the box next to the title

and then use the Featured button in the toolbar at the top of the page.

which will change to

The featured 'star' is shown by the placeholder {featured_pic} in the title section of the view. There are two other placeholders {featured_class} and {featured_detail_class} which may be used to give background colouring to different parts of the Download and Download Details views of featured Downloads.

The standard Downloads and Downloads Details layouts support all three 'featured' placeholders so there is no need to edit the layouts.

For reference the image opposite is an example of a 'regular' frontend view, that is it has not been marked as featured.

The second image opposite shows a 'featured' views using all three placeholders.

The {featured_class} shows a linear gradient background from

. The {featured_class_detail} was selected as the same background colour

thoughout as the end of the linear gradient.

The same effect happens when showing a Download in an article or similar using the Content Plugin and the Content button as illustrated below.  The layout used was "Files Layout Single Line" as selected as the default layout for Content in Options - Content Plugin tab.

The actual CSS code required is itself quite straight forward as noted below.  Basically in these examples it is just setting background colours but you could be more adventurous.

You can also use your own symbols by uploading them as png files with either FTP or the web site control panel into directory /images/jdownloads/featuredimages.

It should have a name like featured_yellow_rose2.png and should be 64px wide and 64px high. Note that the pull down list is ordered alphabetically.

Option Select 'Featured' Symbol' will now include the extra symbol in the pull down list.

The frontend view will now look something like that shown opposite.