Import and Export of Layouts and CSS files [NEEDS REF]

The appearance of the Categories and Downloads in the front end is controlled by a combination of the jDownloads Layouts and the CSS.  The Layouts maybe edited online within jDownloads as described in the Layouts section of the documentation [NEEDS REF].  Editing the CSS files requires a good understanding of css.

jDownloads provides facilities to export and import  Layouts and CSS files.
Editing an exported layout file is not recommended as it is a complex structure and requires a strict form.

The simplest way of editing a CSS file is with a text editor such as Notepad++ on your local PC or similar.  To download Notepad++ see  https://notepad-plus-plus.org/downloads/ (opens in a new window).  The edited CSS file may then be imported.

Note that there are three CSS Files
Just  for clarity:
To access the import and export go to the jDownloads Control Panel and click on the

button.
This provides Import of layout and css files and Export of css files. Export of a layout is available in each layout section.

This article has four parts:

To export a layout you first need to select the type of layout on the Layout Control page, for example to export one of the Downloads layout  click on the

This will then list all the layouts of that type.

Next the 'tick' the select box of the actual layout.  In this example it is a layout called 'Files Layout Single Line v3.2'.

button on the tool bar at the top of the page. 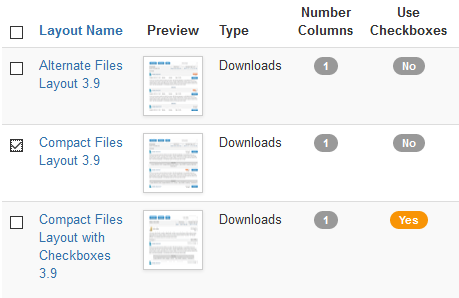 This will open up a standard download sequence in your browser so that you can save the exported layout to a location of your choice.  The exported file is an xml type file as there are multiple parts to a Layout.

The name of the exported file takes a standard form such as "exported_layout_jd_3.9.0_Files_Layout_Single_Line_v3.2.xml".  Note that the name also includes the version of jDownloads.

The Import layout button may be found on the Layout Control Panel and also in each individual layout section.  The imported xml file contains the type of layout so jDownloads knows into which section the uploaded layout file is to be located.

Checks are made upon the structure and contents of the uploaded xml file to ensure it is a valid layout file.

Click on the Browse button to find the xml file, and then click on the Import Layout button.

After clicking on the Export CSS file button on the Layout Control panel, the Layout Export page will be shown.

After some explanation about the three CSS types there will be a Select button and an export button.  Usually it will be either the jdownloads_fe.css or the jdownloads_custom.css files that is selected.

Next click on the Export CSS button next to the Selection button. This will open up a standard download sequence in your browser so that you can save the exported css file to a location of your choice.  In this example the name of the exported file is jdownloads_custom.css

After some explanation about the three CSS types there will be a Browse button and an Import CSS file button. This is uploaded from your local device to the web site.

Use the Browse button to select the particular file to upload to your site, then click the

Note that jDownloads makes several checks on the validity of the selected file.

The picture opposite shows a view of the web site files before the import occured.

Note that jDownloads also supports the  w3schools (opens in a new tab/window) w3.css file.  This is a modern CSS framework with built-in responsiveness. It supports responsive mobile first design by default, and it is smaller and faster than similar CSS frameworks.

If the upload is successful then the new file will be in the directory and the previous file will have been renamed.

This succesive naming continues. To delete a backup file or rename back to  "jdownloads.fe.css" it is necessary to use either a Joomla! file manager, an FTP programme or the website control panel file manager.